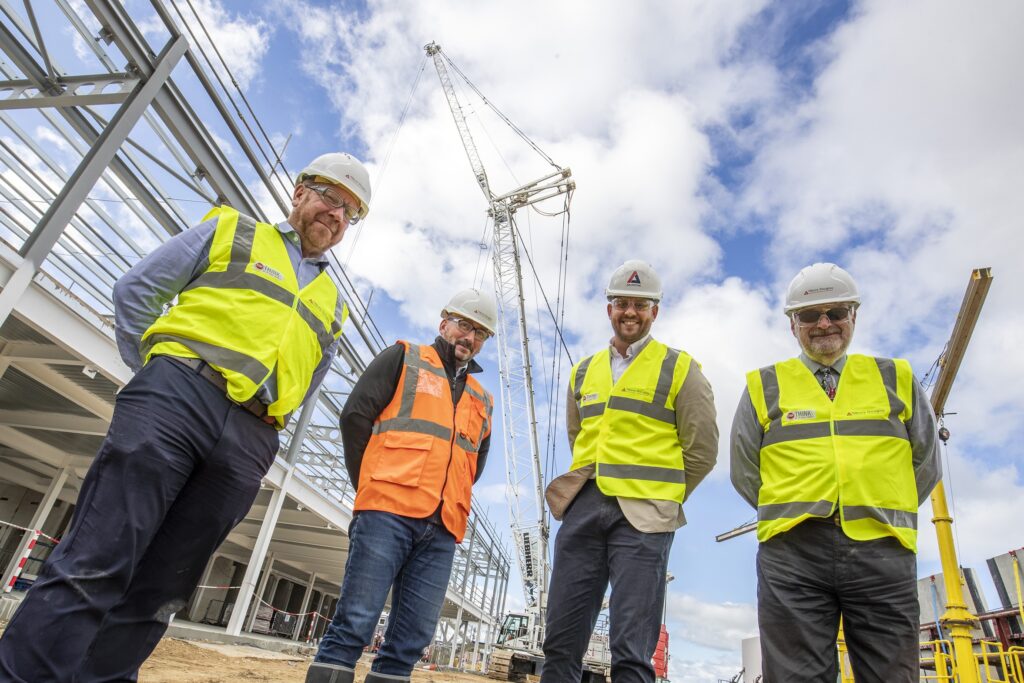 A giant crane, dominating the County Durham skyline, is symbolic of the latest momentous moment in the development of a major residential, commercial and community building project.

It has been installed to support the construction of a new Investigative Hub at DurhamGate, which is five miles from Durham City.

The crane is assembling the large pre-cast concrete panels that will form an integral part of Durham Constabulary’s state-of-the-art project.

The composition of the panels, which are being used in the secure areas, has been chosen as pre-cast concrete is extremely durable, fire resistant and extremely secure.

The crane is a 160-tonne crawler crane, which extends to a maximum height of 75m, higher than a 20-storey building, which means it can be seen for many miles around the DurhamGate site.

The hub, which is due to be completed by next spring, will provide more than 6,600m2 of up-to-date accommodation, including office space, 48 modern cells, interview rooms, Crime Scene Investigation provision, evidence stores, virtual courts, CCTV, an energy centre, medical facilities, and forensic examination rooms.

The project represents the largest investment ever undertaken by Durham Constabulary.  It has been designed to create a sustainable and flexible building that will replace the force’s current ageing custody estate.

As well as enabling the safe detention of prisoners, it will provide a safer, more modern working environment for officers and staff.

Dean Cook, managing director of Arlington Real Estate, which is behind the DurhamGate regeneration project, said: “This towering crane is a very visual indication of how much progress is being made at DurhamGate despite the current challenging climate.”

“It also signifies another momentous phase in the construction of this important development in the Durham Constabulary estate.”

Ciaron Irvine, Deputy Chief Constable of Durham, said: “The sight of this crane on the county’s skyline represents a significant step forward in our mission to create a modern, state-of-art Investigative Hub that our staff and the people of County Durham deserve.”

County Durham Police & Crime Commissioner Joy Allen said: “I am thrilled with the progress the custody suite is making and this crane is the next exciting step towards completion.

“Upon my appointment I took the decision to include social value principles in procurement tenders to encourage successful bidders to award goods and service contracts to organisations based in County Durham and Darlington and the North East Region.

“This project demonstrates great use of social value already, even though it is still in its early stages. We have been able to provide learning opportunities to young people from the area by welcoming two Quantity Surveyor Apprentices onto the building team and we’re also working with local charity Changing Lives to provide training for vulnerable people in the area.

“Once the facility is open it will also provide additional jobs for local people, further bettering the social value for this region.”

County Durham and Darlington’s Deputy PCC Nigel Bryson said: “We are looking forward to seeing this development progress to completion and to it becoming a linchpin in the efficient and effective policing of the county.

“It will deliver a high quality, modern facility and will better reflect the Force’s outstanding ranking for efficiency in its most recent Her Majesty’s Inspectorate of Constabulary, Fire and Rescue Services inspection

“Such a high performing police force merits the most innovative, cutting-edge infrastructure to support its operations.”