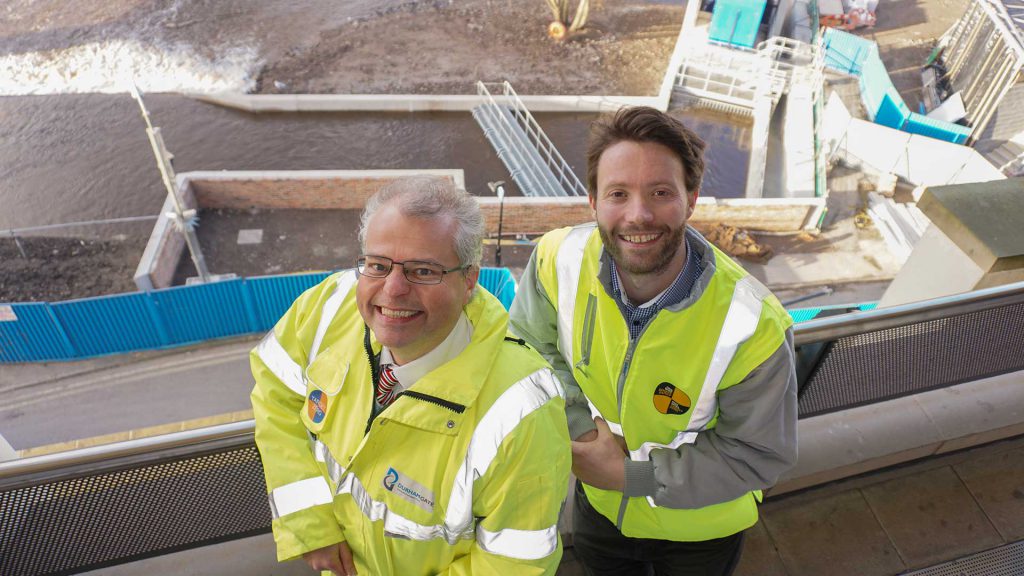 The developers behind DurhamGate have begun generating hydro-electricity at the heart of Durham City after their Freeman’s Reach project became the UK’s first city centre development to incorporate a fully-operational hydro-power generator.

Following the completion of a detailed commissioning process, an innovative water turbine is now harvesting energy from the River Wear, which is driving the 100kw generator.

Power generated at Freeman’s Reach, the Legal & General funded scheme, is fed directly into the National Grid and distributed throughout its network.  The turbine and generator will be operated and maintained by Durham County Council.

Utilising the power of the river, the generator is able to produce electricity that is the equivalent of 75 percent of the total energy requirement of the development.

The power generation is made possible by a 13-metre long, 20-tonne Archimedean screw, which is driven by the flow of the River Wear.

A variable speed drive controls the system according to the available river flow.  Its regular operating speed is 18rpm, generating 60kw of power, with a maximum operating speed of 24rpm, which creates an output of 99kw.

The hydro-turbine has been designed to generate renewable energy 24 hours a day, which will also enable Freeman’s Reach to be awarded an ‘A’ Rated Energy Performance Certificate and BREEAM* Excellent status.

The Archimedean screw also improves the ecology of the river as its design incorporates an improved fish pass, which was created in consultation with the Environment Agency and enables fish and elvers to travel upstream more easily.

A fish counter has also been installed, which not only records numbers, but can also differentiate species. All of this information is passed via a telecom link to the Environment Agency.

The new turbine continues the legacy of hydro-power generation at Freeman’s Reach, which dates back more than 800 years to the original medieval Bishop’s Mill.  Throughout the centuries a variety of buildings have benefited from the energy created by the River Wear including the former ice rink, which was powered by a 1930s turbine.

The new hydro-turbine is set to become a visitor attraction in its own right, as is an Energy Centre at Freeman’s Reach.  They will be joined by a public art installation charting the history of energy generation on the site that will be installed on completion of phase 2 of the development.

Ian Beaumont, Project Director for the Freeman’s Reach Development, said: “We are immensely proud our development in Durham City is making a sustainable contribution to the UK’s electricity requirements.

“The green credentials of Freeman’s Reach make it a stand out development in the North East and demonstrates how a collaborative approach between developers and stakeholders can deliver a unique solution that benefits the area, its ecology and the environment.”

“It is also a great honour to be able to continue the legacy of energy generation at Freeman’s Reach.  The opportunity to harness the power of the River Wear has been a hallmark of the site for hundreds of years and, by applying innovative technology, the river is enabling us to achieve the highest standards of sustainability.”

Freeman’s Reach is being developed by a consortium led by Carillion Developments, part of Carillion plc, Arlington Real Estate and Richardsons Capital LLP.   It is being delivered by a workforce of in excess of 300, which is made up of predominately North East-based contractors and professional service providers.

It will become the new home of National Savings and Investments (NS&I) and Her Majesty’s Passport Office and will open up this part of the riverside to local people and visitors for the first time in generations.

Phase 1 of the development, which is on course for completion in the New Year, will accommodate around 400 NS&I employees.  Phase 2, the new Passport Office, which is currently under construction and scheduled for completion in 2016, will secure 950 jobs (812 full-time equivalent) in the city.

With improved visitor amenities, particularly for those arriving by coach, Freeman’s Reach will offer daytime and evening café/restaurant facilities as well as featuring a new tree-lined Riverside Walk.