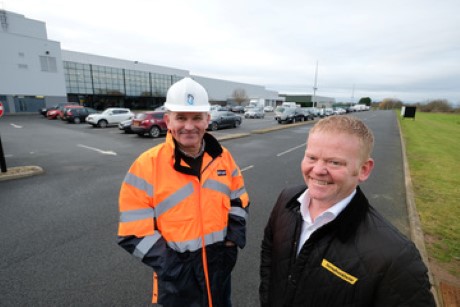 Arlington Real Estate has announced the completion of an agreement that will expand Stanley Black & Decker’s operations in the North East at its site on DurhamGate.

Stanley Black and Decker have signed a new lease with Arlington for the 220,000 sq ft Meadowfield building.

This agreement extends Stanley Black & Decker’s presence in the area having relocated its European Product Development Centre, UK spares and returns operations and its factory shop, from the adjacent site of the original Black & Decker factory at DurhamGate. The company currently employs 111 people on the 12.5 acre site.

Arlington, which has owned and managed the Meadowfield building since 2005, has been instrumental in retaining Stanley Black & Decker in the area.

It managed its development schedule at DurhamGate to accommodate Stanley Black & Decker’s changing business plans and negotiated the deal to relocate the research and development operation to Meadowfield in 2014.

Allan Cook, Managing Director of Arlington, said: “We are delighted to have been able to help Stanley Black & Decker expand its operations at DurhamGate.

“Stanley Black & Decker is an iconic global brand, and has been an important employer in the area since the 1960s.

“It is a great company to have as an occupier so we are very pleased they have chosen DurhamGate to make this latest investment”.

“From this location it has developed tools and equipment used the world over by professionals and DIY enthusiasts, which is a legacy that has continued following its initial move across DurhamGate. By taking the entire Meadowfield building the company has signalled its ongoing commitment to the area.”

“The strong partnerships we have with developers and businesses, coupled with our wide and varied portfolio of sites, has created an environment where employers are confident to invest and to commit for the long-term.

“We are very pleased that Stanley Black & Decker has chosen to demonstrate their commitment to our county’s future.”

Nick Atkinson, Director at HTA Real Estate, who acted on behalf of Arlington Real Estate, said: “This is a significant deal for the North East industrial property market. With the current limited availability of large industrial spaces in the region, this building attracted a steady stream of interest from a number of international manufacturing companies. We are delighted that Stanley Black & Decker is consolidating its long association with the area by taking additional space at Meadowfield.